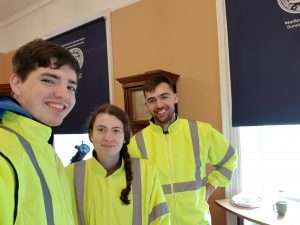 Three weeks in and we were finally getting used to the cycle to Dunsink, Oscar even made it in a record 35 minutes from Tenernure! We started off the day with a cup of coffee and a chat about what we hoped to find when we started our exploration. We each had our hearts set on finding something, from telescopes to sextants, but we never could have dreamt what was coming our way later that day. 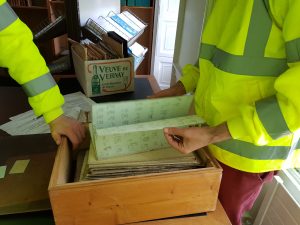 for the penetrating cold of the basement. Amidst our search Oscar called out that he needed help with something he’d found. Gabriel and I followed his voice and found him crouched beside a giant lens lens leaning on its side up against a table, it was almost up to my waist! It would need to be properly cleaned and polished but it was a beautiful piece and it was easy to see why Oscar wanted to resurrect it from the basement. On Oscars orders we gathered around and on the count of three heaved it upwards….. Or so we thought. It didn’t move an inch even with us all trying our hardest – the lens would have to stay put until we could rope some more people into helping us.

After bringing our other finds up to the board room we decided to run up to the library and carry down some of the books we had found the other day. It would be nice to see everything laid out together to get a better idea of what we had so far. With our arms piled high with books we were on our way out the door when Oscar suggested we take a couple of old boxes filled with scrap paper we had discarded previously to have a better look through it. Obligingly we took it with us.

After a quick bite of lunch we opened up the box and started leafing through the paper. It was filled with meticulously done error calculations for the transit circle, we soon realised that the dates matched up with when William Hamilton would have been in Dunsink. We knew Hamilton had done some work on the transit circle during his time here and after some more searching, we found his signature on the front cover of some of the n 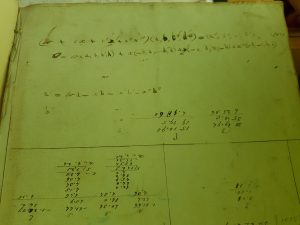 otebooks. We had just stumbled across Hamilton’s workings!

But the best was still to come. On the back of one of the notebooks were the scribblings of a genius – some rough work algebra in a 4 coordinate system – this could only be quaternions! Our timing couldn’t have been better, Peter was just walking through the door. We tried to contain our excitement as we talked over each other, we all wanted to be the one to tell him of our discovery. The jealousy on his face that he hadn’t been the one to find it was visible, it was the perfect reaction!

Check out our new project – a space-themed escape room!

Join us in September for Culture Night 2021.

Missed our Partial Solar Eclipse event with I-LOFAR? Watch it on YouTube!

Our annual Heaventree of Stars event is now also available to watch on YouTube.