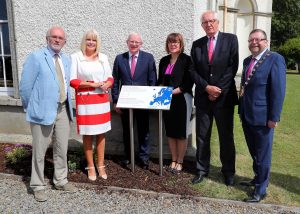 DIAS Dunsink Observatory sealed its status as one of Ireland’s most important scientific sites on the 23rd of June 2018 when it was recognised by the European Physical Society as a “site of historical significance”. Dunsink joins other famous historical sites such as Einstein’s house in Bern and Marie Curie’s laboratory in Paris, in recognition of the tremendous contributions to physics and mathematics made by Sir William Rowan Hamilton. A plaque commemorating this designation was unveiled by Mary Mitchell O’Connor TD, Minister of State for Higher Education and Rüdiger Voss, President of the European Physical Society.

During the ceremony, addresses were given by Luke Drury (DIAS), Rüdiger Voss and Mary Mitchell O’Connor TD, including a poetry reading from ‘A Mystic Dream of Four’ by Iggy McGovern, a sonnet sequence based on the life of William Rowan Hamilton.

Dunsink was selected because of the enduring legacy of Sir William Rowan Hamilton, Ireland’s greatest ever mathematician, on many branches of physics and mathematics. Hamilton lived and worked at Dunsink as Director of the Observatory from the age of 22 to the day he died. (Read More) 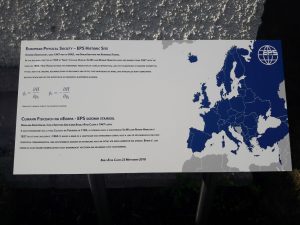 Commenting at today’s plaque unveiling today, Eucharia Meehan, CEO and Registrar of DIAS, said: “It is a huge honour for DIAS to have Dunsink Observatory designated as Ireland’s first site of historical significance by the European Physical Society. Ireland has a rich history when it comes to mathematics, astronomy and the advancement of knowledge.  This accolade from the European Physical Society recognises the impact William Hamilton had on mathematics and astronomy. It is a fitting testament to his legacy.”

Nowadays Dunsink Observatory is mainly used as an outreach centre, as residential accommodation for visitors, and for hosting small research workshops and meetings. Over 4,000 visitors a year come to events and meetings such as Solarfest, Culture Night, Science Week and Public Open Nights during the winter. 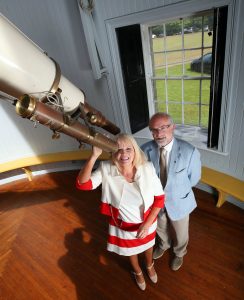 Mary Mitchell O’Connor TD, Minister of State for Higher Education with Professor Luke Drury, outgoing Head of Astronomy and Astrophysics at DIAS during her tour of the observatory.

The day also marked the retirement of Professor Luke Drury, the outgoing Head of Astronomy and Astrophysics at DIAS. Prof. Drury specialises in particle theory and interstellar gas dynamics, and made fundamental contributions to the theory of diffusive shock acceleration. He has been key in building up the Irish national computational research infrastructure, including ICHEC, Ireland’s national supercomputing facility. He was elected a Member of the Royal Irish Academy in 1995 and served as its President (2011-2014). We were delighted to be able to welcome contributions from Professors Heinrich Veolk, Malcolm Longair, Alan Watson, and Julie McEnery to mark Luke’s retirement. 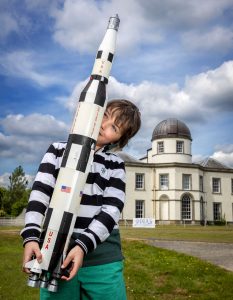 Following the designation ceremony, as part of Cruinniú na nÓg (the Celebration of Creativity and Innovative Thinking), Seanie Morris led a lively rocket workshop for our younger visitors!

In the afternoon, participants in the DIAS Summer School in High-Energy Astrophysics came to Dunsink for lunch and observatory tours, followed by entertaining and insightful talks about scientific discoveries and the human side of scientific collaborations by Malcolm Longair, Alan Watson, and Julie McEnery.

By Qi Qi Kennedy and Jonathan Mackey, drawing significantly on material from the DIAS press release.